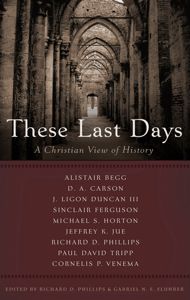 A Christian View of History

I originally published a very short post about this book but decided it deserved added attention.  The short writings that make up this collection were originally delivered verbally in seminars and conferences.  D. A. Carson’s “This Present Evil Age,” can be found in MP3 format at the Gospel Coalition website and other places on the internet in his studies on Revelation.  Other authors with contributions to this book include, Alistair Begg, J. Ligon Duncan III, Sinclair Ferguson, Michael S. Horton, Jeffrey K. Jue, Richard D. Phillips, Paul David Tripp, and Cornelis P. Venema.

These Reformed communicators of the Christian faith storm headlong through the much debated and very difficult doctrine of last things.

“The Christ of History (chapter 1), by Sinclair Ferguson is founded on one verse, Genesis 3:15.  Here is an excerpt from the section titled, “Christ the Meaning of History.”

“The whole of history is, from the beginning of the book of Genesis to the end of the book of Revelation, a story told through the lens of the struggle between these two antithetical powers.  Whether it is Cain versus Abel, or God versus the Tower of Babel, or the Israelites versus the Egyptians, or Goliath versus David, or Babylon versus Jerusalem, or Jesus versus the Pharisees, or the early Christians versus the Roman Empire — in one form or another, the Bible invites us to understand that the basic theme of all human history is, as Augustine famously said, the story of the City of God being built in the context of the City of Man trying to do its best to destroy it.”

Ferguson moves on to establish the truth that Jesus is also the “Center of History.”  When Jesus comes incarnate, “the full force of the enemy is focused on Jesus Himself.”  We’ve been taught to find the moral lessons of Jesus’ life, such as His temptation by Satan.  We ask how can we learn to overcome temptation by the way Jesus overcame temptation.  Ferguson states, “While this is certainly not wrong at all, it is not the point of the narrative to answer these kinds of questions.”  “What is so fascinating in the temptation narrative is that the whole demonic, satanic pressure seems to be employed to keep Jesus away from the cross.”

He concludes with a section titled, “Christ the Lord of History.”  He finishes with this; “We do not yet see Jesus as Lord of all because we do not yet see all things under His feet.  So where are we to look? You have to look at Jesus.  Because, you see, He is not only the Lord of all history, but the Lord of my history.  …don’t you think it is the greatest thing in the world to be a Christian?”

In light of all the confusion surrounding the doctrine of eschatology (billboards placarded with the date, May 21st for one example), this would be an excellent addition to anyone’s library.  I hope to post something from chapter 2 soon…

Seeking the rest that is only promised and found in Christ Jesus, along with my treasured wife of more than twenty-five years, we seek to grow in our relationship with our Heavenly Father, walk with the Holy Spirit as He moves our hearts, loving others always as Jesus loves us, and carry the news of His glory, the wonderful gospel, that gives light and life where there once was only darkness.
View all posts by mtsweat →
This entry was posted in Books and tagged Christian, church, end times, eschatology, history, last days. Bookmark the permalink.
%d bloggers like this: