Attack of the Killer Army Worms

Who knew they were there? Did you? If so, you really should have said something. I suspect you didn’t catch their handy-work either though…

Take a look for yourself. Well, in a moment. First, let’s stand at a distance and catch a view of a beautiful hay field (by the way… they’re only beautiful to those who don’t have to get the hay out of the field… just kidding honey, just kidding).

You’d never think that a field this wonderfully endowed with the green stuff that will soon become winter delivery-to-your-door meals for moo-cows might have a cancerous enemy attacking it and leaving it virtually barren of its needed and life-giving nutrition.

Move on in a little closer. See the way the blades on the grass are moving… kind of like the wind is blowing. (Oh yeah… it’s a still photo. You’ll have to trust me. The wind’s not blowing and the grass is a waving and a’ weaving.)

There! Do you see them? It’s the world renowned army worms that make up the larger majority of all of my wife’s nightmares. In a matter of no time, these boogers sneak into a field and eat everything of any value leaving a bunch of bare stalks… with no (as I said) nutrition for Bessie and Merle. 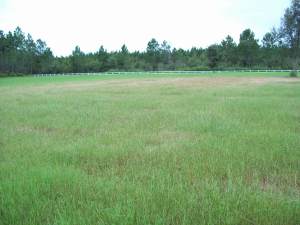 “Look maw! The grass is evaporating!”

Listen folks, if my wife weren’t ever combing these fields with her trusty army worm B-57 modulating detection device, they come through a hay field in the course of a couple of days, chow down, and leave the field barren and useless!

Now for some honesty… These hay fields are a lot like me. Left unchecked, there’s a whole host of army worms ever feasting and devouring (see, there’s one on my hand now! –just kidding again… well, he really is on my hand, but he doesn’t care for flesh. He’s asking me really nicely to return him to his buffet).

What are the army-worm-like destroyers in my life? It seems pride and arrogance consume a bit more of my time than I really like admitting. After all, it kind of hurts my pride to confess I’m prideful doesn’t it? I also don’t have to look far to find a little (okay, a lot) selfishness chewing away. Hey (this is really too easy)! Look at there nestled away and feasting in an area where I normally hide those things I try to not think of… it’s an unforgiving heart.

Please tell me you’ve gotten the point. This is very humiliating, and I could go on forever telling you of these gnawing varmints. Here you were thinking I was all perfect and… what’s that? Oh… so you saw my army worms all along. Were you just going to let them devour me? Relax, I’m kidding again (you’re really uptight today).

Can I share with you how we fixed our army worm problem (yes, those in the hay field)? We got rid of their food source. It was a lot of work and it required sacrificing the entire weekend, but after the hay was baled and stored, those rascals had no reason to remain… there was nothing left for them to eat (look out… they may be heading your way).

Interestingly, it’s a similar solution to my personal army worms. If I want them to quit devouring my life, I have to remove their food source. What is their food source? Me, of course. I have to somehow get rid of me? Yes, and I’m not kidding this time.

A much wiser man than me often instructed, “Take off the old man and put on the new.” Ephesians 4:24; Colossians 3:10

The similarity between the hay field and me is that I stand no chance of ridding myself of my army worms by my own effort. In this, I’m just like the hay field. The hay field didn’t want the army worms to turn it into a dirt pasture, but it couldn’t do anything to stop the field feast. Someone had to do the work for the field.

The same is true on my behalf… and someone did! When Jesus paid the debt that I owed on the cross of Calvary, He took away the penalty of my army worms (sin). For those who are Christ’s, you might say that our hay is secured in a barn. Through the power of the gospel of Jesus Christ, we are given the strength to not just run our army worms to someone else’s fields… but to crucify the flesh, their feeding ground.

It’s why Paul could say with boldness…

“For if we have been united together in the likeness of His death, certainly we also shall be in the likeness of His resurrection, knowing this, that our old man was crucified with Him, that the body of sin might be done away with, that we should no longer be slaves of sin. For he who has died has been freed from sin.” Romans 6:5-7

Okay… okay! One last thing. This post was inspired by that fierce and noble protector of the hay fields… TC (my wife).

Seeking the rest that is only promised and found in Christ Jesus, along with my treasured wife of more than twenty-five years, we seek to grow in our relationship with our Heavenly Father, walk with the Holy Spirit as He moves our hearts, loving others always as Jesus loves us, and carry the news of His glory, the wonderful gospel, that gives light and life where there once was only darkness.
View all posts by mtsweat →
This entry was posted in Animal Kingdom, Life on the Farm and tagged Agriculture, Army worm, baling hay, Calvary, getting rid of army worms, Jesus Christ, protecting your hay fields from army worms. Bookmark the permalink.

3 Responses to Attack of the Killer Army Worms