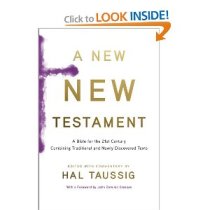 “Distractions” …some time ago I set out on a journey to better understand how we came to have the books that make up our New Testament. Having now chased enough rabbits with Alice, I hope to return to this effort.

Interestingly, A New, New Testament has made its debut, escalating my interest even more in these matters. Do you think stuff like this opens the door for some serious confusion for lay persons as myself when we’re out shopping for a Bible? It includes works such as The Gospel of Mary, The Prayer of the Apostle Paul, and The Acts of Paul and Thecla. Here’s the book’s description offered at Amazon.

“It is time for a new New Testament. Over the past century, numerous lost scriptures have been discovered, authenticated, translated, debated, celebrated. Many of these documents were as important to shaping early Christian communities and beliefs as what we have come to call the New Testament; these were not the work of shunned sects or rebel apostles, not alternative histories or doctrines, but part of the vibrant conversations that sparked the rise of Christianity. Yet these scriptures are rarely read in contemporary churches; they are discussed nearly only by scholars or within a context only of gnostic gospels. Why should these books be set aside? Why should they continue to be lost to most of us? And don’t we have a great deal to gain by placing them back into contact with the twenty-seven books of the traditional New Testament—by hearing, finally, the full range of voices that formed the early chorus of Christians?

To create this New New Testament, Hal Taussig called together a council of scholars and spiritual leaders to discuss and reconsider which books belong in the New Testament. They talked about these recently found documents, the lessons therein, and how they inform the previously bound books. They voted on which should be added, choosing ten new books to include in A New New Testament. Reading the traditional scriptures alongside these new texts—the Gospel of Luke with the Gospel of Mary, Paul’s letters with The Letter of Peter to Philip, The Revelation to John with The Secret Revelation to John—offers the exciting possibility of understanding both the new and the old better. This new reading, and the accompanying commentary in this volume, promises to reinvigorate a centuries-old conversation and to bring new relevance to a dynamic tradition.”

Dr. Jim West, Zwinglius Redivivus, in a post found here, has these kind words to say of Mr. Taussig’s questionable contribution to the New Testament.

“It’s much ado about absolutely less than nothing. …This pseudo-New Testament will only be useful to people who think Christianity should abandon itself and become a new age sect …Oh well if THEY voted (since they’re so much wiser than the Early Church was) I guess that changes everything…”

He has more to say, but with me being one of those detested biblio-dilettantes, I think I’ll encourage you to travel to his place and read for yourself.

Joel Watts, Unsettled Christianity, being a tad friendlier has this to say. “I am going to tepidly recommend this book, but only if you take it as a patristic learning tool and not in any sense as how it is presented on the back cover.” His is a pretty formal review of the product and is worth taking a moment to read. You can find it here.

Seeking the rest that is only promised and found in Christ Jesus, along with my treasured wife of more than twenty-five years, we seek to grow in our relationship with our Heavenly Father, walk with the Holy Spirit as He moves our hearts, loving others always as Jesus loves us, and carry the news of His glory, the wonderful gospel, that gives light and life where there once was only darkness.
View all posts by mtsweat →
This entry was posted in Books, WordPosts and tagged Christian, Christianity, Early Christianity, Gospel of Luke, Gospel of Mary, Hal Taussig, John, Letter of Peter to Philip, New New Testament, New Testament, Prayer of the Apostle Paul. Bookmark the permalink.

10 Responses to Reloading the Canon?