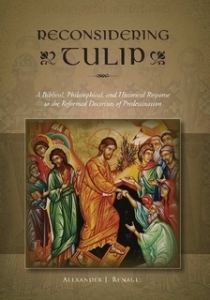 Ex-Calvinist Alexander J. Renault, in his well-written and well-articulated assertion “Reconsidering Tulip,” provides the serious student of truth, especially those enamored by reformed thought, with a prick of doubt which plays the role of pea under the mattress, “How come those closest to the penning of Holy Writ didn’t hail identic oracles as those the Reformed insist upon today?”

From acrostic representatives “T” to “P” the author provides evidence from the next generation post-apostolic who simply did not agree with Calvinistic doctrine.

This is one of those “just can’t overlook” nuances. One cannot write the early leaders of the church off as less apt in interpretive skill, for these include those who studied under the tutorship of the Apostles; those who spoke and read the languages of the original documents, something we are far removed from, and so were Luther and Calvin, charges Renault.

The author, countering Total Depravity, provides quotes that suggest we hear the early Fathers speaking of men with free wills and an image-bearing nature that, although always meandering toward the wrong place because of the flesh, does in fact possess a nature (ousia) capable of choosing rightly.

If the author’s conclusion is accurate, then this is quite bothersome. If the consensus of Luther and Calvin regarding man’s will are so clear, why did those like Clement and Irenaeus not see it?

Struggling to dodge the anomaly, I pose a questioning thought, countering the counter, why then does Paul say, “…by nature children of wrath? (Eph 2:3)” We’ll wait with anticipation for cc’s revealing thoughts on this matter.

Being no Greek scholar or Greek anything for that matter, I can only rely on the English translators, but even the translations strictly abhorrent to Calvinism render the Greek word as “nature” in this text (NAB).

Ending with a few words that attempt to persuade the debate neither way, as I read through the writings of these from so long ago, along beside a determined stand for truth, it seems the personal disciples of the Apostles, and those soon to follow, were far more interested in the changed life effected by Christ’s gospel than a dot-your-i’s and cross-your-t’s grasp of theology. This thought, regardless which side of the fence you reside on, maybe adds fuel… or clutter.

Any thoughts or comments you might lend? Sources of early writings that defend the interpretations of Luther and Calvin?

Seeking the rest that is only promised and found in Christ Jesus, along with my treasured wife of more than twenty-five years, we seek to grow in our relationship with our Heavenly Father, walk with the Holy Spirit as He moves our hearts, loving others always as Jesus loves us, and carry the news of His glory, the wonderful gospel, that gives light and life where there once was only darkness.
View all posts by mtsweat →
This entry was posted in Books, Reformed Theology and tagged Calvin, Calvinism, Christianity, Ex-Calvinist Alexander J. Renault, Luther, Theology, Total depravity. Bookmark the permalink.