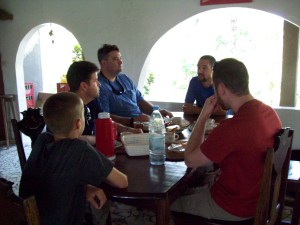 The missionary uses words that sound English enough but I’m not quite sure of their meanings. It seems one of his favorites is this ‘ish‘ type descriptive. Ish is an interesting word for by simply attaching it to the back of any other word, an ambiguity takes front row of the syntax; kind of much like the land we visit.

We learn to appreciate the missionary’s first disciple and his honesty… we cling to him for clarity, and learn, safe-ish means there’s a soldier in a bunker with machine gun pointed our way.

Ambiguity is also an interesting term. The missionary uses it to describe the distant land. There is really never a time in this land when anyone has a firm grip on anything. The missionary and his family have learned to roll with the flow of ambiguity, else our western need for control of every situation would be their demise. One such episode is described well here.

I find myself unable to resist the temptation to borrow the missionary’s lingo, letting the emphasis of ‘cool, cool‘ resonate, but especially finding a home for the ish term; Christian-ish, have we become Christian-ish in the west?

I say to myself, “Self, do those before you have a clear picture of the gospel being lived out everyday in your life; in your words that are spoken?” Or rather, must I attach an ish for qualifier?

Does it take the form of Al Mohler’s words describing a nation that calls itself Christian, “overwhelmingly believing in some deity, considering itself fervently religious, but having virtually no connection to historic Christianity.”? Maybe it rears its head in resemblance of a self-serving lifestyle, where one stores his treasures here on earth, neglecting his heavenly vault impervious to moths and thieves?

The missionary in the distant land may use the term ish often, in reality wearing it out, but no one will ever find the place to attach it to his brand of Christianity, and I’m quite confident his is the one we are called to, the one where Jesus lives and reigns.

This is not so absurd and not suggestive as to suspect life in the distant land and life on American soil can look and feel the same; culturally it is improbable. Yet the gospel that bids the missionary come and die is the very same gospel that bids us do likewise, regardless of locale. 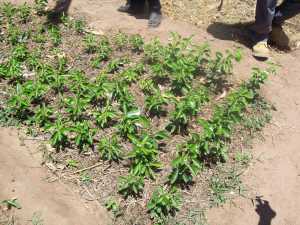 Unlike the relationship between safe and safe-ish, being Christian-ish really isn’t Christianity at all. Christian-ish is just another self-serving pathway, a trail we foolishly believe allows us to attain Jesus’ stuff without His trials and suffering. Christian-ish is an ambiguous means of demonstrating the gospel, and it has left an entire generation confused and disengaged (see Mr. Mohler’s article link above). The wonder is that there is optimism at all. There is…

In the distant land the missionary is seeing evidences of seedlings struggling to break free from good soil. In America, praise the Lord, there are those recognizing the high cost of half-hearted Christianity and many have been awakened to the urgency of living a surrendered life to God and the powerful good news of His Son.

Seeking the rest that is only promised and found in Christ Jesus, along with my treasured wife of more than twenty-five years, we seek to grow in our relationship with our Heavenly Father, walk with the Holy Spirit as He moves our hearts, loving others always as Jesus loves us, and carry the news of His glory, the wonderful gospel, that gives light and life where there once was only darkness.
View all posts by mtsweat →
This entry was posted in Mission Journaling and tagged Africa, blogging, Christianity, faith, gospel, inspiration, ish, missions, Religion and Spirituality, The missionary. Bookmark the permalink.