Journaling in Distant Lands; A Bit of the Treasure

All sorts of wrong feelings run through my mind as I try to understand the life of the missionary. It is with good reason; I’m from America, and so are our dear friends, the missionary and his family.

Because of this, I know some of what was sacrificed to make this move into a hardened poverty stricken land. My mind will not quit wondering, ‘Why here? Why would someone come to a place where even decent drinking water is a commodity?’ And in a moment of sheer honesty I question whether anything could cause me to subject my wife and child to these living conditions as the missionary has carried his into?

As I transfer those words from my journal to this post I remember thinking I would never publish these words. I thought I would never want anyone, especially my friends in the distant land, to know I thought these thoughts. I believe that I need to now, for my sake, and possibly for others.

As my mind is being trained to the wondrous grace of God, one of those acts of training includes correcting my twisted view of why we do what we do. See, when I question why the missionary would make such sacrifices I am asking the wrong question, or at least asking it wrongly. Hence, it is better explained with Jesus’ own words.

The kingdom of heaven is like treasure hidden in a field, which a man found and covered up. Then in his joy he goes and sells all that he has and buys that field (Matthew 13:44).

In this parable, a man simply comes upon a treasure, and joyfully sells everything to attain it. Nothing is mentioned in the parable of the man’s character, just that he is wise enough to see a treasure, and respond appropriately.

In essence, he is simply living according to the words from Paul as he penned Romans 12.

I appeal to you therefore, brothers, by the mercies of God, to present your bodies as a living sacrifice, holy and acceptable to God, which is your spiritual worship (Romans 12:1).

I entice for a sec with  a couple of questions made much of by Chip Ingram in his book True Spirituality.

What exactly does God want from me and how exactly do I give it to Him?

I think the missionary and his family demonstrate the answer to these questions well by acknowledging that our God wants us from us, and that we give Him what He wants by surrendering ourselves to Him as a living sacrifice, but it’s not as though we are making some super ritually religious decision, rather, a logical one.

And that is exactly what Paul declares. Because of what he has described in chapters 1 through 11, Paul now says it is only logical that we would offer our entire selves to God as a living sacrifice.

The term Paul uses, often translated spiritual because of its affiliation with the Temple, is the Greek word logizomai, which literally means logical and reasonable. It is only logical and reasonable to the one who has found a great treasure to put forth whatever is necessary to possess it.

Hear then a few more humbled, even self-shaming, words from my journaling… 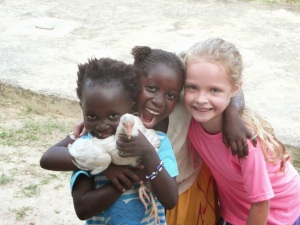 I watch with fascination as the missionary’s younger daughter becomes one of these she lives among. She is learning to do what we are all called to do, yet I fail so miserably at, even though it is not so difficult as her task in my hometown, for there is not such disparity there. 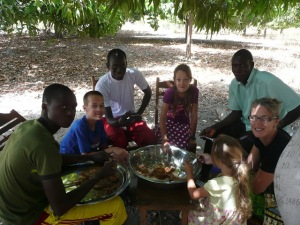 The same is true for the entire family; they are each, in their own way, adapting, persevering, loving…

The missionary and his family are unrealistically at home in this environment. I must highlight this journal entry for further meditation. They have found something of great value that I want to find too.

To find out more about the Boyd family ministry in Senegal, Africa, visit their website; All Senegal for Christ.

Seeking the rest that is only promised and found in Christ Jesus, along with my treasured wife of more than twenty-five years, we seek to grow in our relationship with our Heavenly Father, walk with the Holy Spirit as He moves our hearts, loving others always as Jesus loves us, and carry the news of His glory, the wonderful gospel, that gives light and life where there once was only darkness.
View all posts by mtsweat →
This entry was posted in Mission Journaling and tagged Africa, Christianity, Great Commission, inspiration, Religion and Spirituality, Senegal. Bookmark the permalink.

1 Response to Journaling in Distant Lands; A Bit of the Treasure