Conversing before BBQ in a local shanty, my friend opened his tote and withdrew notes from his studies, revealing a text of Scripture I’ve read often enough as I’m sure you have too. We would refer to it as the calling of the first Deacons and with that little bit of information you can probably turn straight to it in your Bibles. For those who can’t, Acts chapter six. 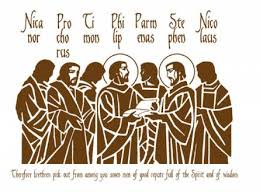 You’ll recall that in this account, a complaint was lodged in the church on behalf of certain widows who were being neglected. The twelve, we are told, call an assembly of disciples, directing them to select seven from among them to serve the widows, leaving the twelve free to pray, study, and preach. They did and it seems everything was taken care of.

I can’t speak for all, but for me, in the next verse I would expect to hear something like:

The seven selected men immediately went to work securing resources to ensure that the widows were fed. Each of the previous forgotten widows were invited to sit at the front of the room, plates sat before them with a special note attached to their napkin reading, delivered especially to you from your friendly neighborhood ministry team. One of the widows was given a few moments to express her gratitude for the selfless act on the part of the servant body, then everyone enjoyed their meal. So the Lord blessed them and was very pleased with their efforts.

Expect all that I want, nothing even remotely resembling this is written. Rather, we read this:

And the word of God continued to increase, and the number of the disciples multiplied greatly in Jerusalem, and a great many of the priests became obedient to the faith (v7).

I am confident with little doubt that the widows and every member of the congregation were extremely grateful for the labors of the seven, but it is interesting to me, as my friend revealed, that the Word of God affiliates the solving of this feeding problem with this only, the continuance of the gospel, discipleship, and faithful obedience.

The dispute of this text, possibly engineered by the enemy, could easily have produced different results. What if the seven had responded, “Uh, excuse me Mr. Peter, but that is what we pay you for.” What if they had refused to use their gifts given by the Holy Spirit to meet the need? If the twelve had had to take on this responsibility for themselves would verse seven not be in our Bibles?

In this narrative, a dispute is resolved, needs are met, and the gospel is preached without distractions and hindrances; where the Word of God’s gospel is proclaimed, the Kingdom grows.

Seeking the rest that is only promised and found in Christ Jesus, along with my treasured wife of more than twenty-five years, we seek to grow in our relationship with our Heavenly Father, walk with the Holy Spirit as He moves our hearts, loving others always as Jesus loves us, and carry the news of His glory, the wonderful gospel, that gives light and life where there once was only darkness.
View all posts by mtsweat →
This entry was posted in Acts of the Apostles, Christians at Work and tagged Acts of the Apostles, Christianity, Great Commission, inspiration, missions, Religion and Spirituality. Bookmark the permalink.

5 Responses to A Purposeful Meal Ticket